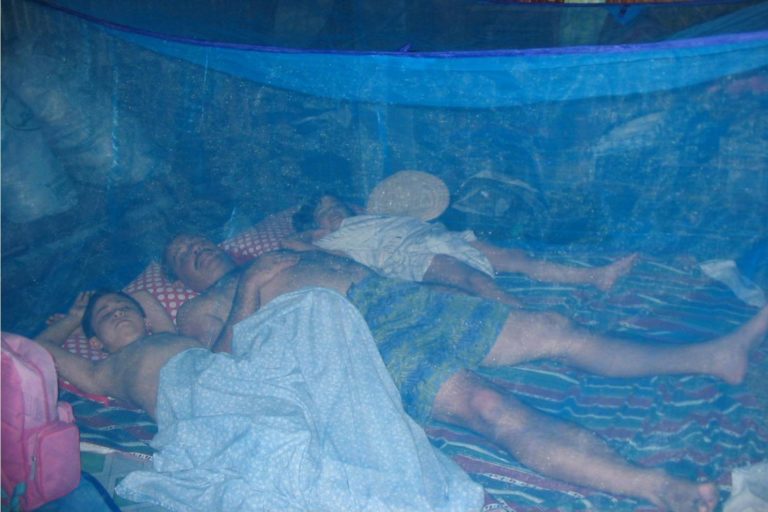 The author with his two kids sleeping  inside the ” Kulambo” or mosquito net. This is the third and last part of episode 1.

“Why did your mother point to the outside corner?” John asked. “I did not hear a thing.”

“We did hear the chicken though. It was a sign that something was making it restless.”

“Your dad is still holding a gun,” John said.

“That’s just a precaution. Likely the person was just looking around to steal a chicken or something. Still, to confront him directly in the dark would be dangerous. They carry machetes you know. They don’t want to be caught.”

“You know Karen, the thought that someone might be sneaking around in that pitch black with a machete is really creepy.”

Their conversation ended when Alfonso announced that he was going home to his bamboo house next to his parents’ place. For better lighting, Karding handed him a larger kerosene lamp made from an empty Tanduay rum ‘lipid’ bottle. They said goodnight and Alfonso left. Karding locked the bamboo framed door with a large linked rusting chain as well as a wooden beam set in place across the door and inserted into heavy steel brackets attached to wood uprights.

“Is it safe for your brother to go out into that darkness –alone?” John worried.

“It is OK now. Besides, my brother lives nearby.”

John and Keren however, were suddenly interrupted again

“John, we better get going; mother is waiting and has made a place for us to sleep.”  **End**

If you enjoyed this story let us know in our  Facebook page and we can encourage the author Robert Coe to write more. If you have any story to share let us know by going to the contact page and fill the form out. Thank you.