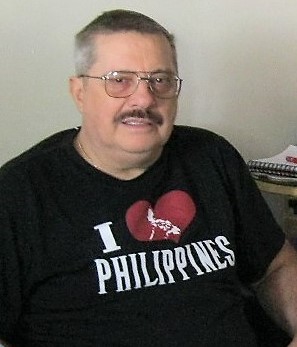 Robert Coe spent most of his younger years loving and enjoying the great wide outdoors of Georgian Bay with family and friends.

Robert also worked in a more restricted environment at Guelph Correctional Centre as an officer with recidivous inmates. Robert is also a PK (Pastor’s Kid).  He later became a CBOQ (Convention Baptist of Ontario and Quebec) Ordained Missionary to serve for many years in the Philippines with his wife Norma and children.  His time in the Philippines with the people and community greatly enriched his life and love for writing.  However, in later years, while in Canada, Robert was diagnosed  in 2013 with a rare disease called Amyloidosis. Like cancer, it has no cure.  Generally, people will go for years before the disease is accurately diagnosed by medical specialists. In Robert’s case, a kidney and bone marrow biopsies finally confirmed the condition.  While living in Hamilton, Robert achieved, remission (disease in hibernation) after chemo treatments and Analogous Stem Cell Transplant at Juravinski Cancer Centre.   Sadly, the Amyloid disease destroyed Robert’s kidneys and he has been on Peritoneal Dialysis every single day since 2016 while awaiting prayerfully for a Kidney Donour to come for transplant. Rob’s medical condition however, gave him the opportunity to pursue when able his passion for writing, which is also inspired by his favourite authors; John Steinbach, Ernest Hemingway, Mark Twain, Dostoyevsky, James Mitchener and Pierre Burton. Robert has a degree in History at McMaster University and Master of Theological Studies at McMaster Divinity College, Hamilton.

The night in the little village was as dark as dark can be. The village still had not electricity and no streetlight shone to give relief from the darkness. John Klein partially lifted open a framed bamboo panel that covered the window. Looking out into the night’s blackness, he saw no evidence of any visible stars. Being night, he again closed the window panel to keep the mosquitos out. A typhoon was further away to the northeast causing the sky to be heavily clouded for days. He and Keren had arrived at the bário earlier that afternoon from Roxas City.  The mission house had not yet been built, so they were staying with Keren’s parents. Her mother and father were tenants on a farm property on the other side of the river that wound its way through the village. To get to it, John and Keren had to cross a three-bamboo bridge. This was to be John’s first overnight visit to Keren’s family in the Visayas region of the Philippines.

That night, placed on a roughly cut planked table, were two kerosene lamps made from a condensed milk can and the other from a recycled medicine bottle. A short distance away on a raised fireplace’s ledge was a single tin can lamp whose wick’s flame cast a fluttering shadow against the nipa hut’s back wall. John not yet use to the intense darkness of village nights felt closed in. He felt that guttural need to take refuge from the impenetrable blackness of the outside night that seemed intent to invade and overcome the dim light of the flickering lamps. John took his place with the others huddled around the table trying to remain in as much light from the lamps as they could –his wife Keren sat beside him, her mother and father and brother Alfonso across from them. There were a couple crudely made chairs and a bench; the chairs being what John and Keren sat upon. John felt his wobble on the hard-packed earthen floor whenever he shifted his weight.

Alfonso’s English was quite good, and he was delighted to be able to use it with his newly met Canadian brother-in-law. Alfonso had that Spanish appearance common to many Filipinos and John could detect what sounded to his ear a Spanish accent whenever he spoke. Alfonso was thin yet wiry from a life of hard work. His black wavy hair was beginning to show some grey.  John was glad too to have this conversation in English with him. While John and Alfonso talked, Keren and her parents became occupied speaking in their Ilonggo dialect. Alfonso would from time to time refill his as well as John and his father’s glass jars with the family-size RED HORSE beer. All along, he would tell how he rarely drank but that this was a special occasion being together. John wondered, but no matter, he took him at this word.

Keren’s dad, Karding, thin like his son, got up from the table and went over to an area of the nipa hut that served as a kitchen. He appeared just a shadow away from the lamps’ light, but John heard the sharp clink of glass. Karding returned into the dim glow of the table’s lamps and set a liquor bottle on the table. John saw the tattoos that had become faint from age on his outreached arm. Earlier in the daylight, he had seen many of these prison tattoos all over his body. John had been told that he had killed a man many years before.

“You drink the juice of the coconut tree?” he said in English.

John lifted the bottle and it read Tanduay on the label and that it was 80% proof rum. However, Alfonso intervened: “It no longer has rum in it. He puts tubâ  (coconut palm wine) into his empty bottles.”

“Papang makes it,” Keren explained. “He climbs the coconut tree still at his age. He wants you to drink some.”

Keren’s mother, Rosing, got up from the table. She wore a drab and worn dress. The kindness that showed so clearly on her face is what John had noticed when first meeting her at the threshold of the nípà hut. Keren told her in Ilonggo that she need not bother to get another jar since John could use the now empty one his RED HORSE was in. Rosing sat down again while John poured a little of the tuba into his jar. He drank it. Its taste was not familiar nor to his liking. However, with Keren’s father anxiously watching for his reaction, John politely lied, saying that it was good, but declined when Karding lifted the bottle offering to pour more into his jar. Undeterred, Karding and Alfonso again filled their own with tubâ.

Alfonso was becoming freer in conversation, asking questions about Canada.  John was impressed that he already displayed considerable knowledge. It became obvious that Alfonso was a reader and educated himself through books somehow obtained. He clearly knew more about Canada than the average American did. Being a rice farmer, he was interested in the weather and the kind of crops grown in John’s country. He was a little surprised to learn that rice was not a crop cultivated anywhere in such a vast land, but when John described just how long and severe the winters could be, he understood.

In conversation, Alfonso got around to the reasons commonly and fatalistically put forth by Filipinos for poverty in the Philippines. “Your country Canada is a very rich country. I have read that there are many natural resources. And the people do well because you have a democratic parliamentary government that actually cares for them.”

“I suppose, basically that is true,” John concurred with some hesitation. “Sometimes, I wonder if our politicians really care so much for us. Generally, it is mostly their interests and those of the party they represent that matters most to them.”

“Still, it is nothing like it is here,” Alfonso continued. “Corruption is what holds us back. The corruption begins at the top where it is at its greatest and flows down to the barangays. However, it is the dynastic families that are the most powerful and corrupt in economics and politics.”